This page is an on-going project, so please check back often for research updates and more imagery. Enjoy!

Superman on the Manhattan Bridge

Superman set photographer Bob Penn and Christopher Reeve went to the Manhattan Bridge in July 1977 to shoot some of the most iconic Superman movie promotional stills ever created. Todd Phillips recently walked the bridge and found the spot where the photo session took place.

The Journey to Lois Lane’s Penthouse

Realizations, Frustrations and Discoveries along the way…here’s Todd’s research.

2. White rails on the narrower balcony below it (240 CPS has this)

4. Most of all there is one taller section with 3 levels and 3 windows on each level above her open doors. This is the most tell-tale detail I am looking for – it has to be a building with one terrace taking up the entire top floor – it doesn’t share the space with other apartments.

*I moved to the Upper West in 1996//97, and since then I’ve been scouring roof tops and terraces wondering where Lois’ was filmed. Though we all knew the scenes were on a soundstage, most definitely his Superman: The Movie approach and Superman II sad departure are a real building.

*In the 90s I couldn’t find a building near Columbus Circle that would’ve had the same view. They likely filmed Columbus Circle cityscape while encamped at the Mayflower Hotel. I often would see a simple red brick building and speculate. I often wondered if there had been a building where Trump International Hotel is, so I researched and that tower was there during the filming up movie, when they were in the Mayflower.

*There were a number of buildings I suspected on the Upper West Side, but all had very narrow balconies and couldn’t be correct.

*Then Filming Locations sites started listing 240 Central Park South as the filming location, and even Superhero Movie tours in NYC has 240 CPS on its website as “the location”. OnLocationTours.com

*Then Donner does an interview in Director’s Guild America (DGA) and states his memory of filming helicopter approaches on Central Park West (not south) of Lois’ terrace and flying the chopper over Central Park, with angry tenants in the neighboring buildings waving flashlights and ruining further shots.

*I walk the entire park looking at Central Park West and every building is extremely ornate, perhaps Gothic or Art Deco. Extreeeemely ornate. I am looking for a simple red brick building with white rails on the lower terraces. It took a long time before it started to dawn on me that perhaps Donner misspoke or misremembered as many years had passed.

*Therefore, it was time to all Detective and look at the ACTUAL evidence. The footage. That’s the only thing that hasn’t change, unlike memories, over time.

*What do I see in the footage? I’ve long thought that the building with the red lights on top was 30 Rockefeller Center (50th and 6th Avenue), which certainly would’ve been visible from Columbus Circle (59th and 8th Avenue).

*Unfortunately, the Empire State Building was not visible in this shot. But what else is?

Thanks to Blu-Ray I am able to make out the tell-tale shape of none other than the Solo Building! Now I have two points of reference.

*Keeping Central Park West in mind, I found that to not be likely as this shot has a very wide city behind the building. So either the shot was looking north of south, but the Upper West Side alone is way too narrow to be what we see.

Two things then occur to me. The difference in architecture between the Upper West Side and the Upper East Side.

The Upper West Side is much older, more pre-war buildings. The rest of the buildings are all Brownstones or walk up buildings. This is a more normal, simpler typical red brick building. Not stone. No décor on its terraces. Simple and plain.

I keep coming back to the idea that it “LOOKS LIKE” many of the apartment buildings on the Upper East Side.

Back to the footage, it strikes me that the building all the way to the right, in the distance and shadow is the Carlyle Hotel! One East 76th and 76th Streets. OK so let’s go with Donner’s memory being totally wrong. Where else would it makes sense for air traffic for a Helicopter to be flying?

1. So we see from left to right 30 Rock with its red letters. The red is wide enough that it must be when it said RCA. For many years it then said GE. It has changed again in recent years, but it’s an obvious landmark.

2. Then we see the white frame and black glass of the Solo building.

3. Center of image is a tall skyscraper which would eventually become Trump Int Hotel at Columbus circle. Mayflower Hotel is to the right of this incidentally but not visible.

4. Then I see the art deco twin towers of the Majestic apartments all way in distance at 72nd Street on Central Park West.

5. And all the way to the right is the definitive dome and top of the Carlyle Hotel.

6. Then my clue was to find the two buildings most in the foreground closest to camera. The one center image appears to be a light color stone or cement with a thicker stone top to it. Rectangluar.

7. If Carlyle Hotel is on 76th Street that would put this roof top penthouse somewhere in upper 70s or lower 80s. And in order to film, it finally occurs to me that it must be on the riverfront.

8. I walk from East 68th Street on 2nd Avenue and walk north seeing many similar red brick apartment buildings, and decide to walk over to east river and simply walk north until I can find a building that is not built at right angles. The rooftop is oddly angular and not a perfect square or rectangle. This detail is what’s always been baffling. Where in New York City would a building have odd angles? Almost everything is perfect angles.

9. I walked north on the FDR River Walk until i started to see One Gracie Terrace and the lower balconies looked correct. Most importantly, the top balcony had the right shape that its does in the movie, and as I walked on the pedestrian bridge that jutts out over the water a bit i could see the identifiably unique three floor tower above the top penthouse.

10. Finally, I said hello to the doormen and asked them if this was in fact where Lois Lane penthouse was filmed, and without hesitation they said it was, and I replied, “I’ve been looking for this building for twenty years!” LOL 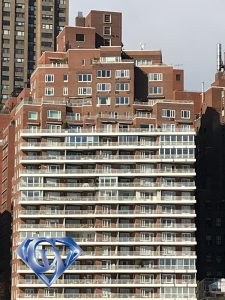 Superman on the Water

I researched this location a few years ago because of my love for the iconic promotional photos of Christopher Reeve as Superman. I discovered that Brooklyn Bridge Park pier 5 in Brooklyn, New York is where Superman set photographer Bob Penn photographed Christopher. The lower circled area is where Chris stood, and the upper circled area is Manhattan Bridge, seen behind him in the B&W photos. I explain in Episode #31 of the Caped Wonder Superman Podcast that a good camera and telephoto lens – with a friend dressed as Superman of course – are necessary to (attempt to) duplicate these photos. Click here to listen to the episode today!