Christopher Reeve’s Star Ceremony On The Hollywood Walk of Fame

April 15, 2021 is the 24th anniversary of Christopher Reeve’s Hollywood Walk of Fame Star ceremony and party in Hollywood, California. We commemorate the occasion with a new gallery of never-before-released photos by Jim Bowers, Jo Addie, Lynn Anderson and other friends; and words of remembrance from Lynn Anderson and Jo Addie.

In the mid-1990s, The International Network of Somewhere in Time Enthusiasts (INSITE) submitted the application and raised the money to get Christopher Reeve his star on Hollywood Walk of Fame in Hollywood, California. I was a member of this fine organization of approximately 10,000 members (they called me “the Superman guy”) during that time. I was thrilled when the Hollywood Chamber of Commerce finally approved the application.

The ceremony took place on Tuesday, 15 April 1997, at 10:00 am in front of the Hollywood Entertainment Museum on 7021 Hollywood Boulevard. Prior to the event, early that morning, I walked down to the star’s location and photographed the two workers preparing the star. I met a few attendees from INSITE and talked for awhile, and then rushed back to my hotel to get dressed and ready all of my camera gear. I watched the press unload their trucks of video and camera equipment and ready themselves for the moment that Chris, Dana and Will Reeve and their friends would enter the Walk of Fame from the back of the museum. I could start to feel the high energy on the street!

Honorary Mayor Johnny Grant was the Master of Ceremonies (the man pictured below in the blue suit). He introduced Chris as the large crowd broke out in loud cheers. Johnny then told the audience about Chris’ career on stage and screen, and proclaimed every April 15th as ‘Christopher Reeve Day’ in Hollywood. Johnny also introduced actress and friend Jane Seymour, Chris’ co-star in Somewhere in Time, and actress and friend Glenn Close, who had just starred in Chris’ directorial debut, In The Gloaming. Jane and Glenn shared heartfelt and personal stories about knowing and working with Chris. Little Will Reeve, who was four years old at the time, was a real trooper throughout the ceremony. He kept his hand on top of his dad’s, patting it whenever people clapped. Chris thanked everyone present and gave a moving speech, reflecting on the early days in his career, and sharing his appreciation to everyone for sticking with him through thick and then.

Fortunately, I was asked to be up front with the press to take photographs. I could hardly move because we were jammed so tightly together. The photographers were a very aggressive bunch. At one point I was actually knocked down by one of them in his effort to “get the shot”. I hope you enjoy the photos in the gallery below. I was quite pleased with the results overall.

Following the ceremony, INSITE hosted a wonderful party on the set of Cheers in the museum. It was there that I had the honor of meeting Dana Reeve, Marc McClure, Yvonne Blake and Richard Donner for the first time. All of these wonderful people were very generous and friendly. I spent a few moments with Chris and presented him with gifts from the town of Metropolis, IL (thanks goes out to the Metropolis Chamber of Commerce), and an autographed Superman \S/ shield that I had asked many Superman celebrities to autograph and write messages on for Chris. Chris asked me to read each person’s message to everyone within ear’s reach. During our conversation, I asked Marc McClure to join us for a photo, and I accidentally called him “Jimmy” instead of “Marc”! This mistake, of course, generated laughter by many standing with us; it certainly made my face turn red! All good fun. I knew others were anxiously waiting to talk with Chris, so I once again congratulated him on his star, and lightly gave him a squeeze on his shoulder. He looked up, gave me one of his classic grins, and thanked me.

This once-in-a-lifetime experience of watching Christopher Reeve receive his much deserved star is a moment in time that I shall never, ever, forget. I felt then, and still feel, truly blessed. Sadly, that beautiful April day a decade ago was the last time I ever saw Chris and Dana. Revisiting and restoring my photos this past week brought back some happy memories and sad reflections. Christopher and Dana…you are missed now more than ever.

Click here to see a set of photos of Christopher Reeve taken at his home in Bedford, New York in 1998. They show a large framed photo mounted on artist canvas from the ceremony that I shot and sent to Chris, along with a complete photo album. I clearly remember Chris thanking me for the photos with a dictated letter. He always made a point to show me his appreciation whenever I sent him photos and other keepsakes throughout the years.

Photos featured on this page were shot and are © Copyright 1997 by Jim Bowers, Lynn Anderson, Jo Addie, Kathy Hutchins, INSITE members, and respective photographers. These photos are not to be reproduced or excerpted without prior written permission. All Rights Reserved. 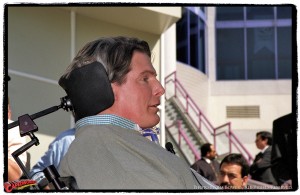 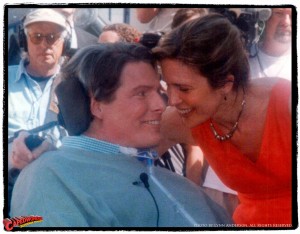