It is an honor to be able to host some of Superfan Jon Fendt’s amazing Superman and Christopher Reeve-themed vector art.

Jon is from the UK who I first “met” in our CapedWonder Facebook group. I was struck by the eye-catching nature of his art, and how it different and special it was (and is) among so much art on social media.

Jon’s artwork has been praised by both fans and Superman stars such as Aaron Smolinski. I look forward to seeing many more art pieces from Jon in the near future.

Thank you, Jon! I’m very pleased that Jon decided to connect with me and all of the Christopher Reeve fans out there. Keep Soaring and Creating!

Greetings CapedWonders and all Superman fans! Thank you so much for visiting and supporting my digital artwork. It’s incredible to think that in mid-2014 I started work on a special remembrance for Christopher Reeve, but only after presenting a few pieces of artwork to Jim Bowers, not only did I have the privilege of having my work presented on CapedWonder.com and becoming a member of it’s extensive family, but also put me in touch with many die hard Superman fans who have become the most wonderful supporters and friends.

I’ve always been interested in film, photography, art and graphic design, and since discovering how to do vector art, I’ve been learning and developing my process and knowledge on contemporary art ranging from minimalist to the most elaborate and unusual, and it’s thanks to truer, more passionate artists that I even try at all. Their skill is awe-inspiring to levels that I could never reach, but as long as I and others enjoy what I do – there’s no reason to give up.

It’s funny how I don’t remember seeing Superman: The Movie for the first time, but I remember it was always being there throughout my childhood. It’s thanks to Reeve’s Superman that I become a Superman fan at all. Like a lot of people, I regard Christopher Reeve as the quintessential superhero role model. I believe he is someone we could all aspire to be in our everyday lives, not by having the ability to move mountains, but by being a friend to all and lending help during times of struggle and hardship. We can all be a hero in our own way, no matter how small we think our contributions are.

All my best to you all and thank you so much for your support.
Jon (Jonathan) Fendt 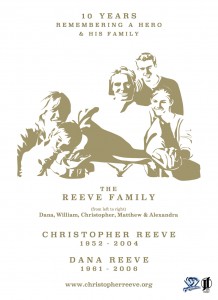